Many economists and political thinkers in Pakistan still assert that agriculture is the backbone of Pakistan’s economy. The statistical facts in 2019-2020 do not agree with this claim.

According to data, the total GDP of Pakistan in 2019-2020 was PKR 43.2 trillion ($ 0.27 trillion). About 54 percent of this GDP comes from the services sector, mainly through highly educated professionals or the highly organised business sector and retail in the more than 500 cities (urban centres) of the country, where 45 percent of the 221 million population lives and works. Industry, mainly large scale manufacturing, contributes another 18.5 percent to the GDP of Pakistan and mining another 5.5 percent. The urban economy contributes 78 percent to Pakistan’s GDP and only 22 percent comes from agriculture or the rural economy where 55 percent of the population lives, work and survives.

Fig. 1 shows the breakup of performance of the four sectors of the economy to components of GDP in 2019-2020. 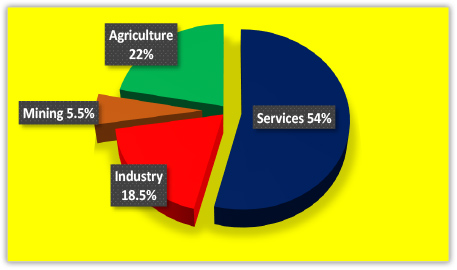 However, this is not a clear picture as far as agriculture is concerned, because when we break down the 22 percent contribution of agriculture, we find that 12 percent in agriculture comes from livestock, dairy and fisheries, another 2.0 percent from forests and only 8.0 percent from farming, as seen from Fig 2.

Fig. 2. Breakup of contribution to GDP of Pakistan by sub-sectors of Agriculture 2019-2020 in percentage

Per capita food production: If 3.0 percent to 5.0 percent of GDP comes from food crops in the country, then the ‘backbone’ of the economy is quite weak and fragile and therefore cannot ensure food security for its population. This can be seen from the fact that if we divide 26 million tons of wheat and 7.4 million tons of rice by Pakistan’s 221 million population, we get in 2019-2020 per capita 0.12 tons of wheat, 0.03 tons of rice and 0.03 tons of maize. Calculating per capita meat, milk, vegetable, other food products produced in the country, the results for per capita production and consumption would be even more depressing.

Productivity of land: According to FAO in Pakistan, 2020, the total land area of Pakistan is approximately 800,000 square kilometres, or about 80 million hectares, out of which only 22 million hectares (27.5 percent) are under cultivation. The rest of the land area is cultivable waste, densely populated forests, and rangelands.

Issue of land holdings in farming: An important factor of relatively less land productivity is the three major forms of land holdings in the country. One, the existence of one thousand or more feudal (above 600 acres) land holdings (about 44 percent of the land), mainly in Sindh and Punjab that produce through share croppers, dividing the land into small land holdings on which the land is cultivated with primitive techniques and technology. Many of these large farms have also shifted to horticulture, cattle farming, or cultivation of cash crops for the market. Second, the existence of thousands of small landholders of twelve and a half acres or less (44 percent of the land) that is below the sustainable limits. The majority of these small landholders cultivate their land through primitive cost-ineffective techniques and a major portion of their produce does not reach the market, but at the same time is sustaining food security of a large part of the rural population that still lives and works in pre-capitalist forms of exchange and in poverty. Third, the above twelve and a half and below 600 acres of capitalist farms or land holdings (almost 12 percent of the land) that in fact are producing with modern techniques and technologies for the market. The capitalist farmers produce both cash and food crops for the economy. Nevertheless, the survival of these capitalist farmers is in jeopardy. Apart from costs of inputs, they face issues of climate change, government non-investment in agriculture, lack of finance, marketing techniques and other problems.

Issues of water scarcity: One of the most important constraints to the farming sector is the mismanagement of the irrigation system and the issue of water scarcity, although canal water is available to the relevantly richer farmers and installed capacity of tube wells is available to the capitalist farmers in many parts of the country where underground water can be found. However, the small landholders face both land erosion from waterlogging and salinity as well as lack of water because rainwater has also become scarce due to fast changes in climate patterns and global warming, causing widespread drought and at times huge downpours and flooding that further erode the land. The country also lacks small water reservoirs to store this floodwater for future use. The quality of water has further eroded due to unabated agricultural, industrial and municipal waste dumped into the water channels and rivers.

Issue of input cost of food production and transportation: In the last thirty or so years, a large number of small farmers near or around the urban centres were forced to sell their land holdings to mushrooming housing societies. This transformed land highly productive for food production into housing colonies for the middle classes and created costly food crises. Pushing food production to land less productive for agriculture, which is also relatively far off from cities and towns, increased the cost of transporting food grain, fruit and vegetables to these urban centres. In addition, the transport cost of fertilizers and technology from urban centres to these farm areas became costly, thus increasing the price of food in the cities.

Apart from the disturbances in the demand and supply chain of food products due to lack of productivity on the one hand and increase in poverty levels among the ever rising population of Pakistan, research shows that 40 percent of food is wasted in the mandi (wholesale market area) and in transportation, thus increasing the food prices for the urban consumers, while the farmers do not get their due share of the international or national price due to cartelisation of the mandis by the middlemen. Cost of farm inputs have also drastically risen in these years and therefore farmers are reluctant to produce food crops for lack of profitability. The problem of low quality seed, education levels among small farmers, and lack of R&D in agriculture also hampers both food production and the production of cash crops in Pakistan.

Issues of rural-urban migration: In modern times, another important constraint is the rural-urban migration of relatively more skilled and healthy younger population for better economic and income generating opportunities in the cities. This leaves a relatively older generation of farmers to cater for food production in the rural areas. The situation would get worse in the future when this youth bulge would be concentrated in the urban centres and the older generations with centuries old (historic) skill and knowledge base for agriculture and food production would drastically diminish. Then the only option for Pakistani economists, the government and the population would be to concentrate on industrial production for export in order to earn enough foreign exchange to import much needed food for its ever-growing population.

A rather tall order where the policy makers and managers of the country have no clue how to overcome its problems of poverty, hunger, illiteracy, health, jobs, law and order and other such socio-economic crises where institutions, laws and socio-cultural relations are still in the 19th century. In 2020-2021, the country and its economic sectors, especially farming, are working through ad hoc day-to-day measures of crisis management without looking into the bigger picture of economic growth, sectoral aspects of economic development and linking this with the quality and quantity of population growth with respect to international standards, work habits and lifestyles.

The writer has a PhD in Economics from the University of National & World Economy (Higher Institute of Economics), Sofia, Bulgaria, and received training by Al Gore as Climate Leader. Currently, he is Professor of Economics at the University of Central Punjab, Lahore. He is the Former Chairman, Department of Economics at GC University, Lahore, with 36 years teaching and research experience. He has written two books and numerous research articles in journals, conferences and newspapers on issues of Pakistan’s economy and is a regular participant on electronic media in the country and abroad (BBC, Voice of America, Al Jazeera) on Pakistan’s socio-political and economic issues. He has also written short stories that are on the Internet. He participates actively as part of civil society on human rights and SDG-related issues and is a member of HRCP, WWF Pakistan, PIDE, and PILA