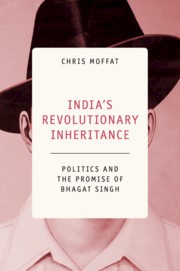 India’s Revolutionary Inheritance: Politics and the Promise of Bhagat Singh

For many months now, tens and thousands of Indian farmers have been encamped outside Delhi as part of one of the most widespread and longest running kisan (farmer)agitations in recent memory. They have been protesting three contentious bills that will adversely affect kisans across the country. Regardless of whether it succeeds or not, this movement has been remarkable for the solidarity it has generated across the country. Whilst most farmers are from Punjab, they have been joined in their protest not just by their compatriots from other regions, but also by other sections in Indian society. More intriguingly, they have also been joined by the dead. Amongst other luminaries, this includes the ubiquitous Bhagat Singh.

As with almost every political movement and agitation in contemporary India, Bhagat Singh has been an inseparable part of this movement too. His name is repeatedly invoked in fiery speeches whilst the yellow turban he is frequently depicted wearing has become a symbol of revolution for many protestors. Meanwhile, Ram Prasad Bismil’s iconic song, Rang De Basanti Chola – said to have been sung by Bhagat Singh and his comrades Rajguru and Sukhdev – is played at full blast in protest meetings. If the song, popularised by Amir Khan’s blockbuster Rang De Basanti and other Bollywood biopics on Bhagat Singh is seemingly everywhere, so is the universal slogan indelibly tied to the memory of Bhagat Singh, Rajguru, and Sukhdev: Inquilab Zindabad.

The same slogan was raised in protests against the 2019 Citizenship Amendment Act (CAA). For its critics, the Act explicitly singled out Indian Muslims for discrimination. In the protests that followed, Bhagat Singh again made an appearance alongside a motley group of characters. In a Press Trust of India report of January 19, 2020, for example, an anti-CAA march from Jamia Millia Islamia to the iconic protest site of Shaheen Bagh reported protestors dressed up as Mahatma Gandhi and Dr Ambedkar, alongside of course, Rajguru, Sukhdev, and Bhagat Singh. The latter were dressed in their prison clothes. As they marched across Delhi, the protestors chanted Azadi.

Across the Wagah-Attari border, Bhagat Singh’s presence is a more conflicted one. He has made an appearance in student solidarity marches in Lahore, where he lived and died. Alongside demanding the restoration of student unions, protesting students have called for an end to administrative highhandedness and harassment on campuses and as well as better services and a better quality of education. And yet, Bhagat Singh’s appearance in recent protests is an anomaly in Pakistan. He stands excluded from the cast of heroes the Islamic Republic has declared for itself. Perhaps nowhere is his contested place more evident than in the annual March 23rd demonstrations at Shadman Chowk, the site of his execution in Lahore. Aside from marking the anniversary of his execution, the gathered demonstrators also press for it to be renamed Bhagat Singh Chowk. Their detractors predictably construe this as an attack on Pakistan’s ideological foundations. Nevertheless, the demand for renaming persists. This not only represents a yearning for progressive alternatives in Pakistan, it also signals an attempt at resuscitating Bhagat Singh in a land where he has long been dead. The slogan of Bhagat Singh Zindabad, then, is a challenge to nationalist parochialism as well as a call for Pakistan, and especially Punjab, to recognise and reclaim its undivided heritage and heroes.

From standing for farmers and religious minorities in India to progressives across the border, Bhagat Singh speaks for a truly astonishing range of political causes. If revolution, freedom, civil liberties, students’ rights, democratisation, anti-nationalism, and cultural and ethnic identity is not exhaustive enough, he is also summoned to speak for causes and projects identified with the nationalist right wing in India. Small wonder then that Bhagat Singh has been the subject of countless books, films, and documentaries. To this, one can also add the innumerable muhallahs, chowks, housing societies, monuments, streets, and public parks that are named after him. For an individual who died at the age of 23 and led no mass movement to speak of, this is an (after)life like no other.

This is the starting point for Chris Moffat’s eloquent India’s Revolutionary Inheritance: Politics and the Promise of Bhagat Singh. Moffat does not attempt to excavate the ‘real’ Bhagat Singh. That, in any case, has been the subject of numerous biographies, scholarly and otherwise. Instead, he is interested in the question of afterlives. How, in other words, do we understand the lingering presence of the dead who continue to make demands on living communities? Or in Moffat’s words, how do the ‘living negotiate a debt to the dead’? And what does this mean for politics in the present? This is not merely a gesture towards the conscious and wilful appropriation of figures from the past who are made to speak at a moment of one’s choosing. Rather, his work seriously considers the ‘force of the dead as entities to whom something is owed – who might themselves conjure politics, calling the living to account.’ The dead are active agents in his telling, not quite restricted to the ‘past’ alone, but rather actively shaping our present. The past is not quite the past. Nor is the present autonomous and free from the past. It is instead interrupted, disrupted, and thrown aslant by it.

Bhagat Singh places a burden on the present like no other figure in India’s rich anti-colonial history. His worldly life, death, and afterlife resist an easy closure. And they open up possibilities that can’t be easily contained. What Moffat offers then, is an open-ended map of Bhagat Singh’s politics and its continued valence in the present. This map is intelligently laid out by the architecture of the book. In the first part, Moffat invites his readers into Bhagat Singh’s life by focusing on the young revolutionary’s education, his militant activities, and his politics in relation to colonial law and justice. This is not a biographical overview that focuses on life with a beginning and an end. Rather, it is a specific retelling of an otherwise all too familiar political life, with an emphasis on the promise of Bhagat Singh rather than an overview of a fixed and close-ended political programme. We are thus introduced to the young revolutionary not as a product of familial or societal relations and obligations, but as someone continually invested in critique, transgression, and refusal. In a similar vein, his politics, militant gestures, and performances in the colonial courtroom are read as a fidelity to truth, which disavows a politics of interest, of dogma, of fixed doctrine, and affirms the fearless enunciation of truth before power and of struggle over compromise, even if it means relinquishing one’s (worldly) life. And it was precisely through his transgressions and his refusal to be contained and disciplined that Bhagat Singh’s martyrdom provided an excess of meaning and a promise of unbounded potential.

What this meaning holds for our present is the theme for the second half of the book. The three chapters therein examine the many and extraordinary ways in which living communities have negotiated the demands placed on them by Bhagat Singh’s supreme act of self-sacrifice. We are introduced here to several movements, from Anna Hazare’s anti-corruption crusade and the Hindu right’s campaigns to leftist students and secessionist movements. We are also introduced to a range of actors; from activists, politicians, and student collectives to artists, scholars, and street performers. In between, we also encounter Bhagat Singh’s material remains and the many memorials, monuments, and public commemorations that seek to honor and reclaim him. Together, this extraordinary range of movements, actors, objects, and spaces is skilfully employed by Moffat to provide an overview of Bhagat Singh’s spectral presence in the post-colonial politics of India, and, to a lesser extent, Pakistan. In doing so, Moffat also touches upon history writing and the archive, debates around public history, and the territorialisation of memory and partitioning of anti-colonial pasts. What emerges from this remarkable collage is not a singular or ‘true’ inheritance, but a multiplicity of inheritors, all bound together, as Moffat argues, by a shared responsibility and obligation to the dead.

It is in this sense that inheritance is ‘never a given, it is always a task.’ Articulated by Jacques Derrida, this quote befittingly inaugurates Moffat’s concluding chapter. It also goes to the heart of his argument. Moffat clarifies this further by arguing that inheritance “is a task in the sense that it requires an affirmation, a choice, to accept our role as inheritors: because to inherit is not simply to have or to receive, but to grapple with a call to responsibility.” Without weighing in on what that true inheritance may look like, or even whether it is appropriate to argue for one, Moffat honors this heterogeneity of inheritors. What emerges from this book, then, is a spectre of Bhagat Singh that remains unbounded despite many attempts to discipline and contain it. And as his many apparitions and afterlives bear witness, the work of Bhagat Singh remains unconcluded, unfinished.

Through this detailed exploration, Moffat has drawn our attention to political communities that tie the living and the dead together in our post-colonial present. Indeed, the ongoing force and valence of anti-colonial pasts in our disaffected present remind us that the promise of freedom and decolonisation remains unfulfilled for many, whether they are farmers, students, environmental activists, or indeed, rightwing nationalists. But in that, Bhagat Singh is hardly unique. Instead, he joins a pantheon of anti-colonial martyrs, from Malcolm X and Patrice Lumumba to Dedan Kimathi and Steve Biko. All are remembered for their uncompromising and principled politics. All offered an unbounded promise and potential that was brutally cut short. All haunt our present with their reminder of promises yet to be fulfilled and a politics that is yet to materialise. In short, all point to futures yet to be claimed. In his eloquent and meditative dialogue with the dead, Chris Moffat has pointed us towards those futures. And by showing how the revenant makes its return, he has also reminded us of how the past and its inheritance continues to weigh heavily on our (allegedly) post-colonial present. For all that, and more, this book represents a major contribution in our understanding of revolutionary pasts, presents, and futures in South Asia.